Christopher Borick, the director of the Institute of Public Opinion at Muhlenberg College, speaks with WLVR’s Brad Klein about the state of the presidential race in Pennsylvania.

He also discusses what polling tells us about what to expect when results start coming in. All signs point to a ‘blue shift’ as the count progresses, with Republicans ‘overrepresented’ at the beginning of the tally and Democrats making up the majority of the ballots counted later, including mail-in ballots. Borick says that voters should expect any Republican lead to lessen as the count goes on.

Listen to the full interview below.

Brad Klein: This is WLVR News, I’m Brad Klein. Joining me is Chris Borick by phone, a professor of political science at Muhlenberg College and the director of their Institute of Public Opinion. Welcome back to WLVR, Chris!

Chris Borick: Thanks so much Brad, great to be back.

BK: The headline of the latest Muhlenberg College/Morning Call survey released at the end of last week; Biden ahead. So, break that down for me.

CB: Yeah, we are in our latest fielding, this is in mid-October of 2020, we find that Joe Biden has a 51-44 lead among likely voters in Pennsylvania heading into the home stretch of the 2020 race. So not very much changed from our last poll in August, it was a 4 point gap. So it seems that it’s 3 points, but it’s pretty much what we saw a few months ago. It’s been a pretty stable race.

BK: I recently interviewed Lee Snover, she’s the chair of the Northampton County Republican Committee, she referred to your polling as, quote, “Morning Call propaganda.” Why should I believe your results?

CB: Well, I’m sure for Lee Snover – and she is trying to do her job in the state Republican Party, just like Democratic Party chairs will do is to spin things the way they hope to. As a researcher and a pollster, I will let the polling results stand, and people can look at them after they’re done and see just how well they performed. And if you look and go back over the 20 years or so that we’ve been doing this, I’m pretty proud of our record. Are there times when polls do miss? Certainly. But I would encourage Lee and others to look at the actual performance before they make their appraisal.

BK: Let me ask you what the numbers tell us about the president’s possible paths to victory in Pennsylvania, is it dependent on undecided voters, those mythical, unicorn-like creatures we hear about?

CB: No, it’s not. It’s not that undecideds are not important in a place like Pennsylvania and a close race like this, and it is a close race. Undecideds could be very pivotal, but there’s just fewer of them this cycle, significantly fewer than there was four years ago. And so their potential impact on late changes is smaller. That turns so much attention towards the idea of turnout; who’s going to show up, who’s going to be there. And that’s one advantage that the president had in our polls. His voters are much more enthusiastic about their vote for President Trump than Joe Biden supporters are or people that are going to vote for Biden are about his candidacy.

BK: It’s really striking, right? You could call it an enthusiasm gap.

CB: No, I think that’s fair. It’s a significant gap in our polling. Again, the president’s got much more enthusiasm among people that are supporting him; it’s a smaller share of the electorate.

BK: And that enthusiasm gap, that enthusiasm difference sort of interplays with the tendency to vote by mail versus voting by person during a pandemic, and there’s a statistical gap there as well, right?

CB: There is, there is. We see a major gap, about a third of Pennsylvanians say they’re going to vote by mail and the rest vote in person this year. But the difference partisan-wise in that intended method of voting is significant. Democrats much more likely to say they’re voting by mail than Republicans, and Republicans overwhelmingly saying they’re going to vote in person.

BK: And maybe that leads us to one of the key terms that we’ll look back on this election and identify with it which is the term “blue shift,” which I think was coined by Edward Foley, an election law scholar, who said that Republicans tend to show up at the polls and can be overrepresented in the initial results; Democrats may be overrepresented in the provisional or later-arriving tabulated votes.

CB: That’s very much in line with what we’re seeing, and this could happen because of the rules in Pennsylvania about when ballots can be counted, largely starting on Election Day. It may create an early result that favors Republicans. As those mail-in ballots start to be counted on Election Day and then into the week as they come in, perhaps all the way until Friday, according to the rules, we can see those percentages in the state change. And so I would encourage everybody to wait to see as all the ballots are counted.

BK: And here we leave the realm of numbers and into the realm of human emotion. I think that Edward Foley who coined the term “blue shift” is quoted as saying, “It may start to look as if, when an election goes into extra innings,” which he means counting those mail-in ballots, those later returns, “It may look as if one of the two teams is getting extra at-bats.”

CB: Sure, especially since Pennsylvania is pivotal. Imagine the scenario late in the week, where the overall election is in doubt in terms of the Electoral College, and all eyes are focused on Pennsylvania, and the count goes on, and it’s changing as we would estimate it would given the difference in voting across Democrats and Republicans and how those votes are going to be counted over time. Lots of emotions, and it will be fueled by rhetoric. You’ll hear from both campaigns, claims about what’s going on. So an emotional time that we’re certainly living in. There is the potential that as that count goes on, it’s surrounded by lots of contest and debates and arguments and loud voices.

BK: Christopher Borick is the director of the Institute of Public Opinion at Muhlenberg College. Thanks for joining us!

Thousands attend Trump campaign rally in Allentown with Pa. proving to be a key swing state 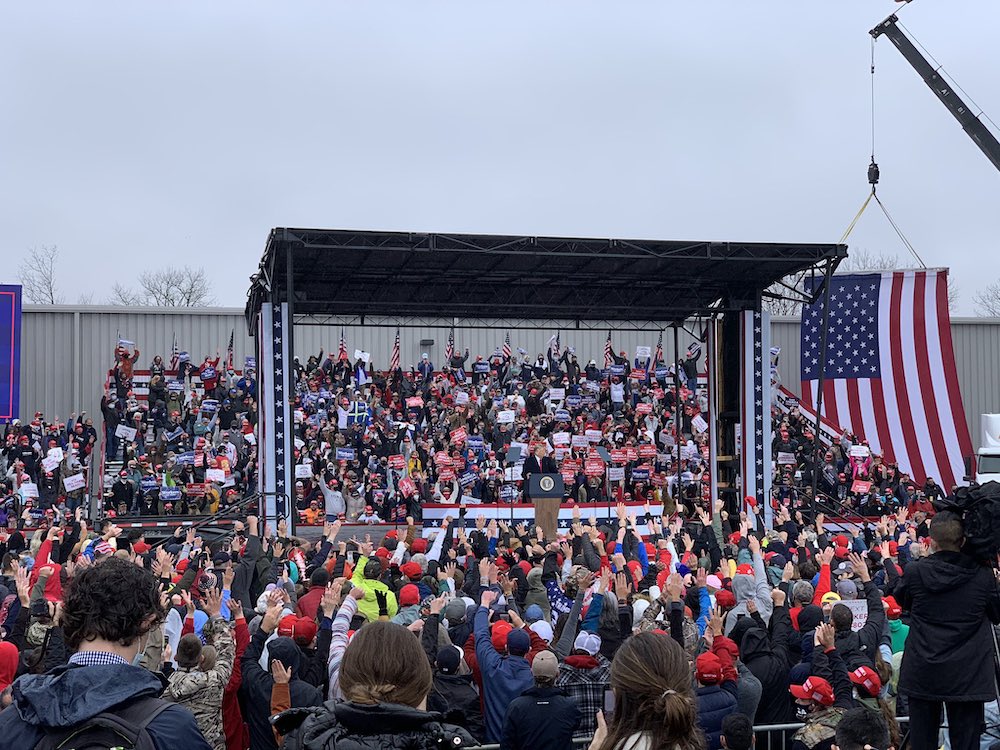